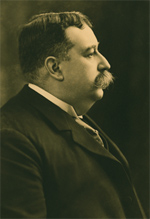 Manoel de Oliveira Lima was born in Recife in 1867. His mother was from Recife and his father was from the Portuguese city of Porto. In 1873 the family moved to Lisbon. Oliveira Lima graduated from the Curso Superior de Letras (today part of the University of Lisbon) in 1888 with a degree in classical and modern literatures. His prolific literary career began at the age of 14, when he established the Correio do Brazil, a monthly journal published in Lisbon. Oliveira Lima wrote more than 20 books, including Dom João VI no Brazil  (1908), Formation historique de la nationalité brésilienne (1911), and The Evolution of Brazil Compared with That of Spanish and Anglo-Saxon America (1914). He collaborated with a wide range of Portuguese and Brazilian writers and was a member of the Brazilian Academy of Letters, the Brazilian Historical and Geographical Institute, and many other learned societies.

The books that Oliveira Lima collected reflect his education, travels and scholarly interests. He developed an early appreciation of the importance of original sources, acquiring works on Portuguese philology and etymology to complement his core collections in the history and literature of the Luso-Brazilian world. His travels gave him the opportunity to strengthen his collection, which he built for his own use and for the use of future generations of scholars.