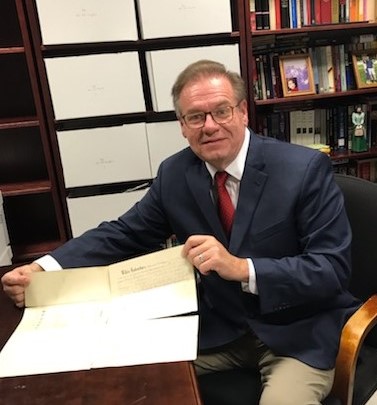 William John Shepherd attended the Indiana University of Pennsylvania (IUP), receiving a BA in History with minors in International Studies and German in 1984, and a MA in History with a concentration in British history in 1986. He began his archival career as an intern at the Maryland State Archives in Annapolis, MD, 1988-1989, and has been employed in Special Collections at CU since 1989, serving as Acting Archivist in 1994-1995, Assistant Archivist from 1995 to 2002, Associate Archivist from 2002 to 2018, Acting University Archivist from 2018 to 2019, and University Archivist and Head of Special Collections since 2019.


He has created, revised, or directed the majority of the archival finding aids (or collection guides) at Catholic University, and is also the creator, editor, and a writer of the blog The Archivist’s Nook.


Mr. Shepherd also appears as a fictional version of himself by name as an archivist who assists Sherlock Holmes and Dr. Watson in the Sherlock Holmes pastiche novella, The Adventure of the Assassino Pazzo (2021) by Craig Thomas Copland.
Back to Top