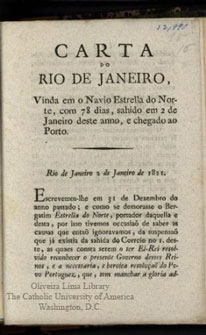 Most of the Oliveira Lima Library’s 19th- and 20th-century pamphlets – nearly all of them rare or unique -- were digitized with a partnership between the library and Gale Cengage Learning. The pamphlets cover such topics as colonialism, the Brazilian independence period, slavery and abolition, the Catholic Church, indigenous peoples, immigration, economic development, geography, agriculture, medicine and public health, international relations, and Brazilian and Portuguese literature. Now this digital collection is open to public at OLL Digital Portal -- Pamphlets.

The partnership between the library and Gale Cengage Learning also digitized over 3,000 monographs and rare books in the Oliveira Lima Library, which is open to public at OLL Digital Portal -- Books.

In addition, Brazilian and Portuguese History and Culture: The Oliveira Lima Library, a licensed database in Gale Primary Source, contains both digital collections above, which are accessible—for viewing, full-text searching, and downloading— for the Catholic University community on site and remotely; access by visitors and guests is only available on site in the Mullen Library.

Manoel de Oliveira Lima was a prolific correspondent, who corresponded with more than 1,300 individuals and groups. The library contains correspondence Oliveira Lia received from family, friends, booksellers, diplomats, historians, authors, professional organizations, editors, lawyers, etc. Staff has begun to digitize these extensive files and a growing sampling of the correspondence is available online. 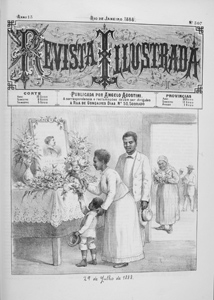 Image: A family pays homage to Princess Isabel, who in 1888 declared the abolition of slavery while acting as regent in the absence of her father, Dom Pedro II, Brazil’s last emperor. The Revista illustrada(Rio de Janeiro: Angelo Agostini, 1876-1895) is considered to be the most important political and satirical magazine of the 19th century in Brazil. 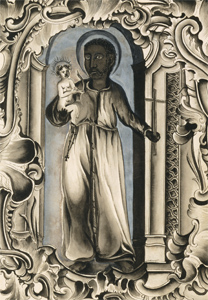 Artworks and Other Visual Materials 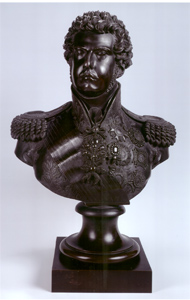 The library holds several hundred artworks, including paintings, drawings, prints and sculptures. It also holds numerous maps, more than 1,000 early 20th-century postcards and 2,000 photographs, some from the dawn of photography in Brazil. Among the most important artworks are a landscape of Pernambuco by the Dutch painter Frans Post (1669); ten watercolors by the Spanish military engineer, Francisco Requena, painted on the upper Amazon in the 1780s; 18th-century maps of the New World by Juan da la Cruz Cano y Olmedilla; a portrait of the Prince Regent of Portugal, the future King John VI, by the Italian artist Domenico Pellegrini (1806); a landscape of Rio de Janeiro (ca. 1816–1821) by the French painter Nicolas Antoine Taunay ; and a bust of Pedro I, Emperor of Brazil, created from life (ca. 1826) by the French sculptor Marc Ferrez.

Other Portuguese topics that are well represented include literature from the 16th to the early 20th century; chronicles of the realm; diplomatic history; religious orders; the Marquis of Pombal; and the collected writings of António Vieira, Francisco Manuel de Melo, José Agostinho de Macedo, Camilo Castelo Branco, Eça de Queiroz and others. 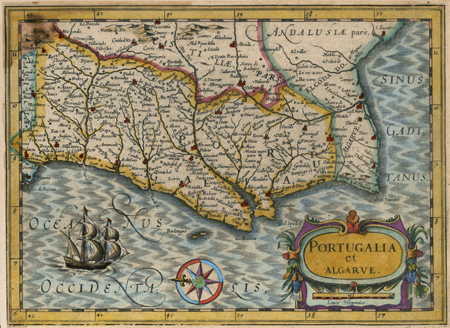 The library’s collection of Brasiliana is the largest of its holdings and represents all periods of Brazilian history from the 16th to the early 20th century. Every part of the collection contains rich resources for scholarship. The oldest book is Montalboddo’s 1507 Paesi nouamente retrouati, which contains the first printed account of Pedro Alvares Cabral’s voyage and discovery of Brazil. Among its many early Brazilian books, the library holds a copy of Luiz Antonio Rosado da Cunha’s Relação da entrada que fez ... o Senhor D. Fr. Antonio do Desterro Malheyro, bispo do Rio de Janeiro (1747), the only work published in Brazil before 1808, the year the Portuguese crown lifted its prohibition on printing in Brazil, and the Preciso dos sucessos ... (1817), the first work printed in Pernambuco, which recounts the revolt in Pernambuco that was the first organized attempt to proclaim Brazil’s independence.

The collection is also distinguished by extensive holdings in the following areas: travel books; 17th-century books and pamphlets on the Dutch in Brazil; Portuguese and Brazilian pamphlets related to Brazilian Independence; the proceedings of the first constituent assembly and the annals of the national legislature since 1823; literature of the Brazilian Empire and Old Republic; and the publications of the Brazilian Historical and Geographical Institute since 1839. 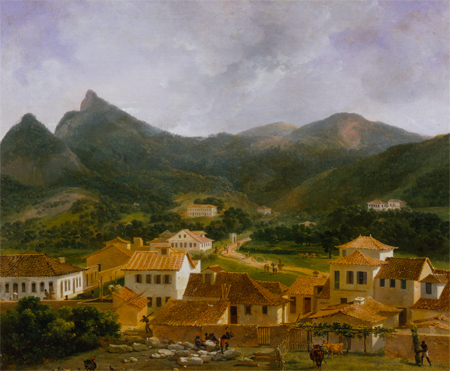