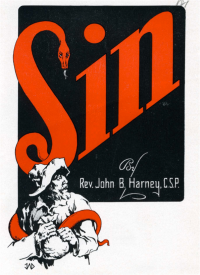 The Rare Books and Special Collections department at Catholic University Libraries has assembled the largest collection of American pre-Vatican II pamphlets in the United States (over 12,000 items) together with an additional 3,700 parish histories from Catholic parishes across the country. These titles, which generally date from the 19th to the mid-20th centuries, are accessed through an online database maintained by the department. At the present time these titles are not listed in SearchBox.

Covering topics from confession to Communism, dating, temperance, suicide, and vocations, the pamphlets were often packaged in small formats with eye-catching cover art and text by well-known writers including Daniel Lord, S.J. and Fulton J. Sheen. Some pamphlets were written specifically for children, printed in large type and colorfully illustrated. Other pamphlets address the laity's responsibilities as members of the Church, or of religious benevolent societies.

Titles reflect diverse aspects of American social history including economic justice, race relations, parochial schools, peace and war, patriotism, prohibition, Nativism and anti-Catholic prejudice. Official Vatican translations of Papal documents, pastoral letters written to interpret these for American Catholics, and pastoral letters reporting on Church synods and councils explain the Church's position on the major issues of the day. The pamphlets as a whole document the development of the American Catholic Church, its relationship with the Vatican, Americanism, and changes in liturgical practices.